Motivated by the Scientific Evidence for Urgency and Inspired by the World’s Youth, ESSA Staff Participated in the September 27 Climate Strike

As scientists, the urgency for more aggressive climate change mitigation and adaptation measures has been on our minds increasingly over the past few years. 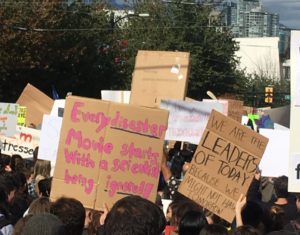 September 27, 2019 Climate Strike in Vancouver, BC. Photo by Clint Alexander.

Climate scientists have estimated the remaining amount of CO2 that can be emitted into the atmosphere by human activities while still holding global warming to the desired 1.5°C temperature limit established to avoid uncontrollable runaway feedbacks at about 420 gigatons (as of 2018), a value the globe is on track to emit within 8-9 years. This means that if we are unable to massively scale up our ability to begin drawing down carbon from the atmosphere at massive scale by the mid-2030s to limit the duration of warming overshoot to less than a few decades, catastrophic changes such as widespread ice sheet collapse (hydrofracturing, cliff failure) and multi-metre sea level rise (17+m) will be locked in and assured within about another 50-150 years (Hansen et al. 2013[1]).

Climate scientists such as James Hansen and colleagues have been clear that evidence is mounting for serious underestimation of climate system feedbacks including glacial hydrofracturing, high elevation glacial melt and permafrost thawing. These feedbacks now appear as though they will be triggered within decades not centuries. In short, if we wait until the 2040s to “get good” at drawing carbon from the atmosphere, it will be too late to reverse it and go back.

The time for change is now – and along with leading scientists, the world’s youth know it.

In August 2018 youth activist Greta Thunberg sat in front of the Swedish parliament in Stockholm for the first ever ‘school strike for climate’. A year later, her movement went global. A week of youth-led demonstrations and climate strikes began September 20, 2019, disrupting business-as-usual and mobilizing people of all ages and backgrounds in a unified peaceful demand for climate justice and evidence-based action. Parents, unions, teachers, farmers, doctors and workers in over 6,000 cities in 169 countries organized climate strikes in September. Building on the momentum of Greta Thunberg’s anticipated appearance in Montreal, the largest demonstrations in Canada occurred on September 27, 2019.

Motivated by science and inspired by Greta and youth across Canada and around the world, the ESSA team stood in solidarity with youth during the climate demonstrations, taking to the streets on September 27 in climate strike events on Vancouver Island and in Vancouver, Waterloo and Ottawa.