Geomorphic Change Detection is a technique by which changes from the geomorphic processes of erosion and deposition are inferred from repeat topographic surveys. 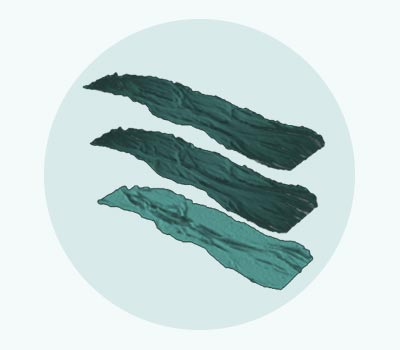 Due to the quantitative and spatially explicit results it yields, geomorphic change detection is rapidly becoming a more common tool in the monitoring of rivers and in particular restoration monitoring. The biggest challenge in employing such techniques is quantitatively distinguishing changes due to geomorphic processes from those changes due to noise and uncertainty inherent in the digital elevation models.

The GCD is a suite of GIS tools that work within the ESRI ArcGIS Desktop software.

The GCD software was developed primarily for morphological sediment budgeting in rivers. The volumetric change in storage is calculated from the difference in surface elevations from digital elevation models (DEMs) derived from repeat topographic surveys. As each DEM has an uncertain surface representation (which might vary in space and time), our ability to detect changes between surveys is highly dependent on surface representation uncertainties inherent in the individual DEMs.

The fundamental problem is separating out the changes between the surveys that are due to geomorphic change as opposed to noise in the survey data. GCD provides a suite of tools for quantifying those uncertainties independently in each DEM and propagating them through to the DEM of difference. The program also provides ways for segregating the best estimates of change spatially using different types of masks. The overall suite of tools is more generically applicable to many different spatial change detection problems.

Schematic of the concept underlying the GCD, along with a screenshot of its user interface.

The GCD is licensed for use at no charge. Use the links below to download the latest version of the toolkit. Also available at Github

Contact us if you have any questions or would like to discuss the current or future GCD feature set.